Zack Greinke to the Brewers 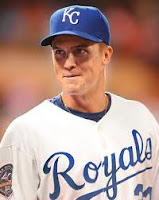 This has by far been one of the crazier offseasons I've seen in a while.

In another unsuspecting twist on the trade front, Royals ace Zack Greinke was traded to the Milwaukee Brewers, this according to a confirmation tweet by Jon Heyman of Sports Illustrated who confirmed the news after it was posted by blogger Jim Breen of Bernie's Brew Crew on the Milwaukee Journal Sentinel's website. Apparently some fans were suspicious of the rumor, and rightfully so as many belived the Rangers would acquire him.

An interesting note to all this is that Greinke told the Royals that he wouldn't mind going to New York as Jon Heyman later tweeted. Greinke was the Yankees best option to fill the void of losing out on Cliff Lee, but the team said that they were not "enthusiastic" about a possible trade for Greinke due to his mental struggles, and the Royals were seeking too much in a trade.

It would have been interesting though to see what the Yankees may have done had Greinke been left lingering for a while longer and continued to voice his willingness to go to the Bronx. I'm not saying that the Yankees would have made the trade, as they would surely have had to give up key prospects for Greinke, but a trade for Greinke would definitely have relieved the anxiety that many fanatics still feel after Lee signed with the Phillies. Perhaps even, maybe the Royals, looking to release Greinke, would have been willing to re-negotiate on their terms with the Yanks, which was reportedly a trade including Jesus Montero, Dellin Betances and Eduardo Nunez.

Another interesting note: the Yankees may finally face Greinke next season, as they host the Brewers June-28-30. Greinke hasn't pitched against the Yanks since August 2008 at the old stadium.

Email ThisBlogThis!Share to TwitterShare to FacebookShare to Pinterest
Labels: Zack Greinke, Zack Greinke to the Brewers