The Yankees have asked for medicals on RHP Freddy Garcia of the White Sox; this according to a tweet today by Andrew Marchand of ESPNNewYork.com.

His fastball is all but disappearing from his repertoire and he can only dial it up to 88 mph. That number is nothing to cough at, as we fanatics saw what Mike Mussina was able to do with his fastball at that range for the latter years of his career. But Garcia is not in the class of a Mussina, thus lacking the ability to locate and "paint the corners" as an adjustment to pitching with a "slow" fastball. Garcia's best pitch is his changeup, but he uses it less than his fastball. He is prone to giving up too many home runs and his BAA is worst than the league average--if he's ahead in the count, batters slug .373 (LA is .308); when he's behind in the count, batters slug .536 (LA is .498). Take a look at the following graphs. Note: graphs are his daily values, not season values: 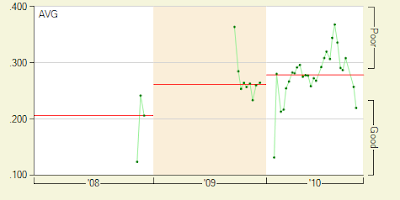 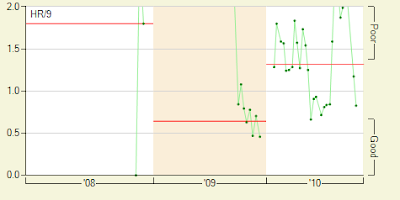 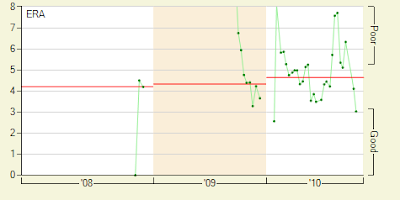 So am I at all for the Yankees signing Garcia? Depends on the situation. If the Yankees want him as a possible reliever, he could be of some value, but definitely not as a starter. If Andy Pettitte returns, the Yankees best option is Ivan Nova in the 5-spot. If Pettitte retires, they should bring up one of the Killer B's.

Email ThisBlogThis!Share to TwitterShare to FacebookShare to Pinterest
Labels: Freddy Garcia, Yankees May Be Interested in Freddy Garcia