Yanks Have Yet To Make Offer to Cliff Lee 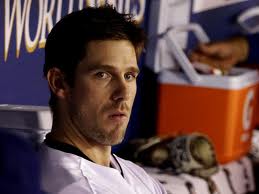 If you thought that yesterday's New York Post article that the Texas Rangers are preparing to offer Cliff Lee a 5-year, $23 million per deal to counter an alleged proposal by the Yankees is true, it may not be.

As reported by Wallace Matthews of ESPNNewYork.com, truth is the Yankees have yet to make any offer to Lee and are not pressured by the Rangers bid. A source who is supposedly involved in the negotiations said that "nothings happening there yet," and that "it sounds like a lot of BS being put out by the agent."

As both teams remain the front-runners in the Lee sweepstakes, the Yankees are the surest bet to acquire Lee as they can counter any offer made by the Rangers. It was reported last week that the "The Assassin" is supposedly seeking a 7-year deal which neither team seem willing to oblige.

Check out this latest video from ESPN:

Email ThisBlogThis!Share to TwitterShare to FacebookShare to Pinterest
Labels: "The Assassin" aka Cliff Lee, Yanks have Yet To make Offer to Cliff Lee