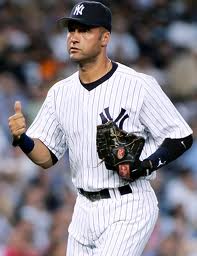 Apparently the Jeter negotiations are moving into its next phase. Finally.

After a 3-week stalemate of which we fanatics had only been privy to "shots" from both sides via the media, the Captain and his agent Casey Close, met with Yankees officials yesterday in Tampa, this according to a report by Ken Rosenthal of Fox Sports.

By late yesterday evening, Co-Chairman Hank Steinbrenner spoke with the Associated Press via telephone and shed a positive light on the negotiations. According to George A. King's article in this morning's New York Post, "Hammering" Hank told the AP that he is "confident that Derek will remain with the Yankees, and my brother [is], as well."

Although neither report could say who actually met with the Jeter Camp, it is believed that Co-Chairman Hal Steinbrenner and GM Brian Cashman were in attendance.

In another twist to this meeting, Jon Heyman of Sports Illustrated tweeted last night that a source believes the Yankees may increase their original offer of 3 years at $45 million to $51 million with an option for a fourth year.

My thinking on the Jon Heyman tweet is that the Yankees may feel that they have to make Jeter the highest paid shortstop in the league because he's Derek Jeter, of course. With yesterday's official announcement that SS Troy Tulowitzki of the Colorado Rockies sealed the deal on a contract paying him $15.75 million per for the next 10 years, the Yankees may be inclined to push the $51 million offer which would pay Jeter $17 million per. The general consensus during these negotiations has always been that the Yankees would overpay Jeter; it wouldn't surprise me one bit to hear in the coming days the Yankees' confirming this offer or any other that puts Jeter ahead of the $15.75 million Tulowitzki deal.

Hopefully these talks are a sign of a much more amicable negotiation process to come. My wish is that by Winter Meetings end, both the Captain and the G.O.A.T will have jobs again, and "The Assassin" aka Cliff Lee will be calling CC Sabathia to help him shop houses in New Jersey again.