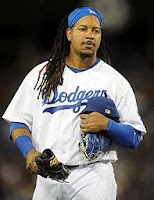 Ok fanatics, the title doesn't say that they are indeed interested in Manny Ramirez, it simply says they talked to Manny.

Which is part of their due diligence which they impart every year with free-agents who fit a need. This is the sentiment of YES Network's Jack Curry who tweeted about the talks today.

Apparently the Yankees are in need of a right-handed outfielder and Ramirez fits both bills. But it is unlikely that the Yankees will take a chance on him, as his reputation both on the field and in the clubhouse precede him. I do realize that there are some fanatics out there who wouldn't mind seeing Manny in pinstripes because they respect his game, as do I, but he's not the right "fit" for this organization. It's too bad though, because Manny still has the "stuff" that walk-off dreams are made of.