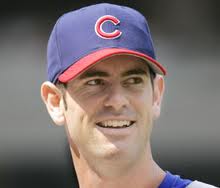 Cliff Lee was not the only pitcher the Rangers were hoping to retain and vie with the Yankees for.

According to this article in The New York Times, Rangers pitcher Mark Prior received offers from both teams. After days of deliberation, he's chosen to sign with the Yankees.

Prior was never the same dominant pitcher though after 2003, as he became plagued with shoulder and elbow injuries. He stayed with the Cubs until 2006, which is also the last season he's pitched in the majors. In the interim, he's had several surgeries and one inning of baseball with the Rangers' Oklahoma City AAA team last season. Dusty Baker, Prior's former manager with the Cubs, has been widely blamed for overusing Prior, thus resulting in his breakdown.

The Yankees are hoping that Prior will add needed depth to their bullpen. His contract will pay him $750,000 guaranteed, with an additional $750,000 in incentives if he makes the team out of Spring Training. He will be reunited with Larry Rothschild, his former Cubs pitching coach who now holds that position for the Bombers. Prior may also be reunited with former teammate Kerry Wood if the Yankees can re-sign him.

Email ThisBlogThis!Share to TwitterShare to FacebookShare to Pinterest
Labels: Mark Prior, Yanks Sign Mark Prior to Minor-League Deal