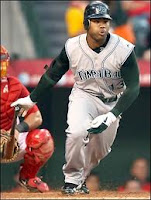 The Red Sox have come to an agreement with Tampa Bay Rays left-fielder Carl Crawford on a 7-year deal worth a snazzy $142 million.  This according to a report by MLB Rumors of this tweet via Peter Abraham of the Boston Globe. Looks like Red Sox Nation was hell bent on outdoing the Yankees at these Winter Meetings by attemting to make the biggest splash this offseason. I say attempting because no deal made this free agency will trump that of whoever wins the Cliff Lee sweepstakes, and bets are that it will be the Yankees.

It's been said throughout the blogosphere and sports pages recently that Crawford was to be the Yankees plan B if the Cliff Lee deal fell through. During the Winter Meetings, many sportswriters said the expectation was that Crawford would wait until a Lee deal was done because that would put the Yankees in the mix to bid for him and we all know that the Yankees would have won that bid war. Crawford would be the only free-agent left that would make a significant impact on the Yankees status in the AL East. But, perhaps Crawford was ready to get a deal done; he was probably willing to go to either team as the Red Sox and Yankees are always expected to top the AL east and make a run for the World Series Championship. The deal makes Crawford the highest paid outfielder in history.

Should Bomber fanatics be at all shaken by this news? I don't think so. Sure Crawford is a superstar and a sure bet as he has no problems physically and has yet to show any signs that his speed is causing wear and tear. But the Red Sox are working with a lot of maybes right now. Maybe Jacoby Ellsbury will be back to his true form and stay injury-free in 2011; maybe Adrian Gonzalez will rehab well from shoulder surgery and be ready for Spring Training;  maybe Big Papi will have another season worthy of his player option being picked up for next year; maybe Jonathan Papelbon will decrease the number of blown saves next year and get back to an ERA of below 2. Maybe, maybe, maybe. There's no real assurance that Crawford's signing means Red Sox domination in 2011. And if the Bombers sign Cliff Lee, we'll have the two top lefties in the AL to neutralize those pesky lefties in Boston's lineup.