Yankees May Stick With Current Rotation 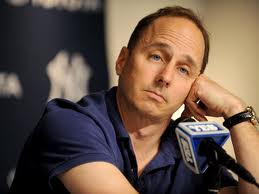 This was not the offseason that Brian Cashman nor the Yankees fan base thought it would be.

The Yankees were supposed to get Cliff Lee. Many, including myself, believed that acquiring "The Assassin" was more than just having the best postseason pitcher of the past 2 seasons in the rotation; it also may have been the clincher to Andy Pettitte making an early decision to return.

As of today, Lee has signed with the Phillies, again, and Andy remains undecided. The only other pitcher remotely close to Lee's or Pettitte's caliber was Zack Greinke and he's been traded to the Milwaukee Brewers. With no star pitchers left to acquire, Cashman is preparing for the possibility that the rotation may stand where it is.

"I'm not saying I want to do it, but I may have to do it," is what the GM told ESPN's Wallace Matthews yesterday. Assuming that Andy  won't return, he added, "If we get Pettitte back, so much the better. But I'm not waiting for him. He told me not to."

As the pickings have gotten grossly slim on the starting pitcher front, there is a real possibility that a new starter won't be acquired until sometime in the season. If the Yankees are desperate enough, they may have to trade some key prospects which is what they refrained from doing for Greinke.

Cashman has always been vocal about pitching being the key to winning. He's certainly in a position he doesn't want to be in, but there's not much he can do. I'd rather see the team use the young arms in their farm system to fill the possible 5-spot in the rotation, rather than go out and acquire a sub par pitcher out of desperation.

However, the verdict is not out yet on Andy Pettitte. He's taken this long before, in fact, even longer. We'll just have to wait and see what his heart tells him.