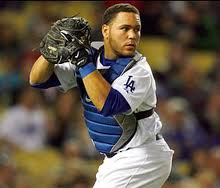 Here is the press release from mlb.com:

The Yankees have agreed to terms on a contract with free-agent catcher Russell Martin, multiple sources told MLB.com on Tuesday. Details of the deal were not immediately available, but it is expected to be announced at some point on Tuesday.

The Yankees have not confirmed the signing.

The Bombers missed out on Cliff Lee late Monday night, when the ace left-hander spurned them -- and the Rangers -- to sign with the Phillies. But New York also beat out Boston and Toronto -- though in a far lesser way -- to obtain the services of Martin, who was non-tendered by the Dodgers this offseason.

Martin, 27, was deemed among the best catchers in the National League from 2007-08, when he was a back-to-back All-Star while compiling a .286 batting average, .380 on-base percentage and 32 homers. But after a down year in '09, when he compiled a .250 batting average, Martin played 97 games in '10 and then missed the rest of the season with a broken right hip.

The Yankees are expected to have veteran Jorge Posada serve as a full-time designated hitter next season, while Austin Romine, Francisco Cervelli and highly touted prospect Jesus Montero are expected to compete for playing time at catcher in Spring Training.

Posted by Rasheeda Cooper at 11:32 AM