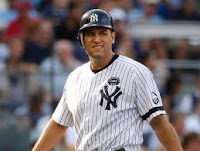 Via this tweet by Jon Heyman, the Cardinals and Yankee DH Lance Berkman have agreed on what seem to be a 1-year deal for $8 million. Berkman, who was a first baseman with the Houston Astros before coming to the Bronx, may play the left field in St. Louis, moving Matt Holiday to right.

No mystery to Berkie not playing first base with his new team as that spot is occupied by Albert Pujols. What is a bit surprising is that Berkman seemed to fill the DH role pretty well after catching his bearings in New York; I would think he'd be looking to sign with an American League team. He is traditionally a first baseman having played the position in high school and the minors, but was placed in the outfield with Houston as the position was then manned by Jeff Bagwell. His defense in the outfield was less than impressive, and he was moved to first base in 2005 following an injury to his predecessor.