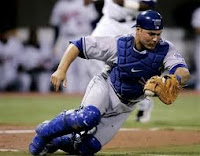 On the day that Russell Martin officially signed his new 1-year, $4million contract with the Yankees, it's been reported that the catcher will need knee surgery.

Like his soon-to-be teammates, CC Sabathia and Jorge Posada, Martin will have surgery to repair a minor torn meniscus in his right knee. This was first reported by George A. King III and Brian Costello of the NY Post. And, like both Yankees vets, Martin's recovery period is expected to be three weeks, so he should be ready to go by the time Spring Training arrives.