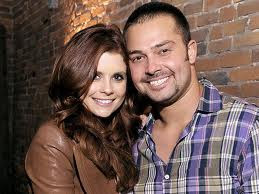 Congratulations to Nick Swisher, who married actress JoAnna Garcia yesterday in an evening ceremony at the Breakers Hotel in Palm Beach, Fl.

The two began dating in May of '09 and became engaged a year later. Yankees teammates who attended the wedding were Alex Rodriguez, Robinson Cano and Johnny Damon.