One of "Hank's Yanks" Gets Minor League Deal

Here is the article from Bryan Hoch of Yankees.com: 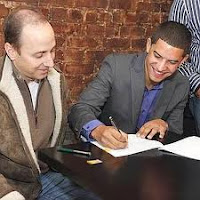 For Leonel Vinas, it had been enough to spend a summer wearing a uniform for "Hank's Yanks," the youth ballclub sponsored by Yankees co-chairman Hank Steinbrenner.

Now the 19-year-old Long Island product will have a chance to don the pinstripes at the next levels. The Yankees announced on Tuesday that they have signed Vinas, the right-handed ace of Steinbrenner's team, to a Minor League contract.

"I've been to China and Japan to try to bring back some players, and it's great also to be able to show that we can look right around the corner here in our own backyard and find players, too," Yankees general manager Brian Cashman said.

Vinas' entry into the farm system is the first product of Steinbrenner's involvement with the youth team, which is comprised of talented players from diverse socioeconomic backgrounds throughout the New York area.

The highlight of Vinas' season was a victory over Mariano Rivera's All-Stars at Yankee Stadium, when Vinas' outdueled Mariano Rivera Jr. for a 3-2 victory that clinched the first annual "Boss' Cup."

"It was incredible," Vinas said. "The team was sponsored by Hank, and he called us after most of the games to see how we were doing. He came to the game at Yankee Stadium. It was the best experience I've ever had."

Vinas signed his deal after being called to the Yankees' complex in Tampa, Fla., for three private tryout sessions, working off a mound in front of Steinbrenner, vice president of amateur scouting Damon Oppenheimer and vice president of player personnel Billy Connors.

A 2009 graduate of Freeport High School in Freeport, N.Y., who moved to Long Island from the Dominican Republic at age 11, Vinas said playing under the Yankees' umbrella had only been a distant dream.

That changed when a friend introduced him to special adviser Ray Negron, who saw Vinas' promising fastball, curveball and changeup arsenal and brought him to Steinbrenner's team.


"This is not a baseball story. This is a story about life in New York City, and one of the kids out on the streets of New York City," Negron said.

Vinas said that at the beginning of this year, he "wasn't really doing anything but being in the streets," but as the season went on and he spent more time on the mound, his prospects improved.

He was 12-0 with a 1.12 ERA in 84 innings pitched for "Hank's Yanks," recording 168 strikeouts, including two no-hitters -- a four-inning no-hitter vs. Adelphi University and five no-hit innings vs. Suffolk Community College.

"They told me, 'You've got a chance to be a Yankee,'" Vinas said. "When they first told me that, I didn't believe it. I didn't think it was true. As the season went on, it got bigger and bigger, and here we are now. My dreams are coming true."

Vinas said that he will report to Tampa in two weeks to begin his professional career, expecting to start in Rookie ball as a reliever. It will be the first rung on a ladder that the Yankees hope he will be able to climb.

"This is real. He's got talent," Cashman said. "We're looking forward to seeing where the talent takes him. I try to tell all the players that we sign, we're going to make sure that we provide everything at our disposal to see if the dreams can come true."

Email ThisBlogThis!Share to TwitterShare to FacebookShare to Pinterest
Labels: Leonel Vinas, One of "Hank's Yanks" Gets Minor League Deal