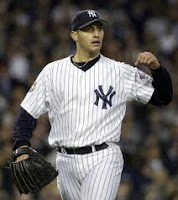 Get ready for another big announcement, fanatics.

According to this tweet from Jon Heyman of Sports Illustrated, Andy Pettitte is expected to decide whether or not he'll return to the Yankees for the 2011 season in the next few days. This is exciting news, as we have all been patiently waiting to know whether our beloved star lefty will revive a now-compromised rotation, and give a run at the title one more go.

I don't think anyone will argue that right now, the Yankees need Andy Pettitte if they want their best chance to advance to and through the playoffs next year. The Bombers lost out on the Cliff Lee sweepstakes, and at present, Ivan Nova and Sergio Mitre are the projected back-end of their rotation. If the Yankees get Andy, Mitre, who sports a career ERA of 5.27, will remain in the bullpen. The rotation would probably look like this:

This is a similar rotation to that of the 2009 WS Championship team, except Burnett and Hughes were in the 2 and 4 spots respectively, and the 5th starter was Joba Chamberlain.