I'm a bit disappointed in both developments for different reasons. It baffles me that the Yankees would choose to re-sign Sergio Mitre and allow Moseley to hit the open market as he is a more viable and productive long-man than Mitre has ever been with the Yankees. Moseley did come up short in some relief appearances in 2010 but he also came up big--his six innings of two-run ball against Toronto in August; his defeat of the Boston Red Sox August 8 in which he was a last-minute fill-in for AJ Burnett; and his ALDS game 1, 2-inning domination of the Texas Rangers. 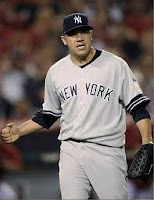 Alfredo Aceves has been more than productive for the Yankees since 2009. He boasts a 3.21 career ERA with a WHIP of 1.06 in 59 games. It was reported Wednesday that he had surgery to repair a fractured clavicle sustained in a bike incident with 3 months rehab to follow, which would give him enough time to be ready for play come Spring training. I don't think that the Yankees were hesitant to re-sign him because of this. My gut tells me that more will develop on the Yankees and Aceves in the coming weeks.