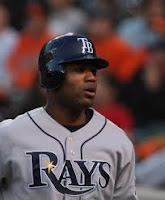 With the signing of Mariano Rivera and the now-impending close to the Jeter negotiations drawing near, the Yankees are now apparently setting their sights on Carl Crawford.

According to a report by Jon Heyman of Sports Illustrated, the Yankees have reached out to Crawford and want to meet with him. Other clubs who are in serious talks with the left-fielder are the Angels and Red Sox.

Hmmm. The Red Sox. Could the "Evil Empire" be at it again? Could this be retribution for the Red Sox reportedly reaching out to Mariano Rivera before he agreed to his 2-year, $30 million deal with the Yankees? Piracy against Boston's booty is what the Yankees do and do best. Wouldn't surprise me at all if Cashman is sending a "do you really think you can go there with me?" challenge to Red Sox GM Theo Epstein. The "Nation" really put themselves out there by pursuing Mo.

If the Yankees do sign Crawford to what insiders believe may be the highest free agent contract this market, they will most likely trade Brett Gardner or Nick Swisher. I personally don't think the Yankees really need Crawford as the outfield is pretty solid, but I can't argue that the team will be better with him in the lineup.