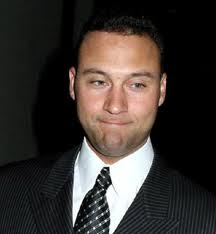 What I have been waiting to hear since the Jeter negotiations began, came to fruition about an hour ago as Derek Jeter, spoke to the media for the first time, in a press conference announcing his "return" to the Yankees.

The level of class that the Captain has always exhibited was shown again today to no one's surprise. What was surprising, was Jeter's openness about his anger and frustration of how the negotiations were played out in the media:

"I'm gonna be honest with you guys," Jeter said. "The thing that probably bothered me the most was how public this became, you know, this was a negotiation that was supposed to be private.

'It was an uncomfortable position I felt that I was in. It was not an enjoyable experience...because throughout the years I prided my self on keeping things out of the papers and out of the media, and this turned into a big public thing. That was something I was not happy about and I let my feelings be known.

"This whole situation when you talk about free agency...I never wanted to be a free-agent; it was the situation that I was in, but I would be lying to you if I said I wasn't angry at how some of this went."

On a lighter note, when Jeter was asked if he could ever really see himself play for any other team after the multitude of PhotoShopped pictures of him in other team jerseys appeared everywhere, the Captain responded, "Well I've been PhotoShopped in a lot worse pictures than other teams' uniforms. I don't know if really that's that bad."

"But no," he continued. "Like I've said time and time again, I never wanted to go anywhere. I can't stress that enough; this is the best organization in all of sports. We have the greatest fans in the world.

"You talk about this being a negotiation...I wasn't negotiating with anybody; I was just basically talking with the organization I wanted to play for."

When he was asked by Sweeny Murti of WFAN to elaborate on who he was angry at, the ever-classy Jeter declined, citing that now he and the Yankees were all "one big happy family."

I am very proud of my Captain and now I believe, contrary to what I've said recently, that waiting to have his say at this press conference was the right idea. My worry was always that Jeter was being made out to be unreasonable behind the scenes by the Yankees front office. But what else could I assume when they were the only ones doing all the talking? I guess there's the lesson about ass-uming. But today, Jeter made the Steinbrenners, Cashman and Levine look like antagonists who should have known better. It has always been Jeter's style to come out on top, and after today, he remains there.