Johnny Damon Back to the Yankees? 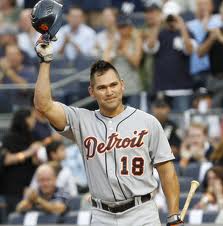 This from Ken Davidoff of Newsday:

"While the Yankees' primary focus remains pitching, they have been communicating with free agent Johnny Damon about a possible return to the Yankees for 2011, Newsday has learned.

"Four sources said that Damon and the Yankees were talking about a role in which Damon, 37, would get occasional at-bats as a designated hitter and fill in at leftfield, allowing starting leftfielder Brett Gardner to either rest or shift to fill in for centerfielder Curtis Granderson or rightfielder Nick Swisher."

I'm not sure how I feel about this. Johnny Damon was an integral part of the 2009 WS team with the Yankees and during his tenure in the Bronx, we witnessed him come up big many times in key situations. He can still hit and he's beloved in the clubhouse and by the New York media. But Damon is in decline offensively and defensively and it just isn't smart for the Yankees to bring another aging player back into the fold.

I like Damon, but there's no real upside to bringing him back. Posada will probably play a lot more games at DH than he has the past few seasons as catcher, and unless Gardner, Granderson or Swisher suffer any significant injury, I don't see where Damon will get much playing time. Besides being a back-up outfielder or DH, he may be called in to pitch hit against a left-handed pitcher, but that still won't amount to the kind of playing time that he probably wants. All-in-all I doubt that the Yankees will bring him back.

Email ThisBlogThis!Share to TwitterShare to FacebookShare to Pinterest
Labels: Johnny Damon, Johnny Damon Back to the Yankees?